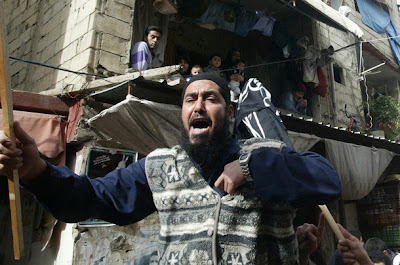 According to a great OSINT site that I use, two al-Qaeda top leaders were killed by Lebanese troops this past weekend. The terrorists were heading to Iraq to join insurgents. The site I monitor, SITE Intelligence Group has its HQ in Washington, DC. It tracks militant postings on the internet and intercepted a statement from the Fatah Islam group, confirming the deaths of Abdul-Rahman Awad (above photo), a Palestinian leader of Fatah Islam and one of the most wanted men in Lebanon, and his aide, Ghazi Faysal Abdullah. Interestingly, Tatah al Islam’s top leaders are known to have close links to al-Qaeda in Iraq and Awad sent his son to Iraq to become a suicide bomber. Awad and Abdullah were both killed in a firefight that occurred Saturday in Lebanon’s eastern Bekaa Valley.

Ironically, the SITE Intelligence Group first intercepted this communique and then released it to the AP.

Posted by Corey Pearson- CIA Spymaster at 11:17 AM