﻿     I was amazed at the recent media blitz accusations that the FBI and National Security Agency (NSA) are spying on American cell phone usage, while the word Echelon remains inaudible.
By the time you finished reading the short paragraph above, Echelon intercepted more than 70,000 phone calls, e-mails, and faxes across America. It does, indeed, exist inside the NSA...and I'm glad it does. I believe this global surveillance system, which has been operating for decades, is necessary to effectively combat terrorism. To demonstrate how this vast system works, I wrote a not-so "fictional" account of Stacey and her work inside NSA's Echelon surveillance system.
﻿
Echelon- The Most Secret Spy System


Ironically, conservative and liberal politicians along the beltway are in favor of the NSA and FBI (CIA is also involved) recording cell phone and computer usage among Americans. Of course, they never mentioned the word "Echelon", but rest assured, they all are aware of its existence and that it is the most pervasive global eavesdropping network in history. Today, Echelon will capture three billion electronic communications.

Read Corey Pearson- CIA Spymaster in the Caribbean and get to know Corey and how the CIA works. First 3 episodes are free!

So, let me introduce "Stacey" who works inside the NSA. To many within the U.S. Intelligence Community (IC), the near future is impossible to accurately predict since global terrorism behavior is so capricious.
But, Stacey uses Echelon's preemptive capabilities to gain much insight into the future. Both liberal and conservative politicians focus narrowly on the media hoopla surrounding  the FBI and NSA spying just on cell phone calls. Call it a "bait and switch" tactic...whatever..because they don't want America to know about the larger, vast surveillance net. I support them, for Echelon provides the West with covert power shaping abilities into world affairs that keep us out of harm's way. OK, now I'll shut up...enjoy my story about Stacey:
Stacey walked into security clearance at the National Security Agency (NSA) in Fort Meade, Md. She differed

from the thousands of other highly-trained and indoctrinated Echelon signals intelligence analysts. Immediately, she logged onto her computer terminal and entered a personal code. Her assignment was to hunt down a terrorist, codenamed “radical archer.”
Britain's MI6 and MI5 learned that he had purchased shoulder-firing missiles that were stolen from a British army 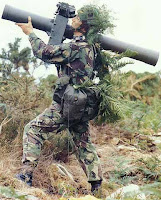 unit outside London. British and American intelligence kept their knowledge hush-hush and the citizens of both countries had no idea that these deadly missiles were in terrorist's hands.
"Radical archer" reportedly had many friends in Tunisia, including black market arms dealers. If knowledge is power, Stacey was about to become the most powerful person in the world. She revved up a mighty program codenamed “Dictionary” and tapped in 4-digit codes for the Tunis, Tunisia locale; people’s names and subject headings; and Internet addresses, telex, cell phone, and fax numbers used by individuals, businesses, government offices and private organizations associated with “radical archer.” She pressed ENTER and connected to a synergistic, global interception and relay espionage system that can deftly pry into private and commercial communications.
Stacey’s confidential Dictionary program stores the Dictionary lists of other Echelon agencies from around the world. So, if she intercepts a keyword listed on Britain’s Dictionary, her computer would pick out and record the intercept, and send it to Britain’s spy headquarters, and vice versa.
Ground stations in the U.S., UK, Australia, Canada, New Zealand and in other nameless locations place their interception systems at each other’s disposal. Using this worldwide network of massive ground-based radio antennae, Stacey effortlessly infiltrated the group of Intel satellites encircling the earth used by telephone companies as well, enabling Stacey to pry into maritime

communications off the Tunisian coast. Other keywords entered into Echelon's Dictionary sifted through millions of simultaneous phone calls, fax, and 90% of the world’s private e-mail addresses, filtering out information that could lead to the whereabouts of “radical archer.”
Stacey tapped in other ground station codes, gaining access to Russian, Indonesian, and Latin American satellites. Amazingly, she intercepted thousands of phone calls to and from Tunisia that were transported by cable under the Mediterranean Sea. Navy Seals secretly installed intercept devices on the cables 300 feet down.
Any one and anything that America’s intelligence community is concerned about can be targeted by Echelon. There is no medium of transporting information that cannot be listened to by Stacey. She operates in a legislation-free environment, above the law, and can effortlessly invade family businesses and personal civilian privacy. She’s accountable to no one. Her name, position, and salary remain nameless and traceless and her funding resources are buried deep within the Pentagon’s procurement budget and hide in the stock market under a street name account held by the CIA.
Suddenly, a red light glowed, signaling a “hit” from the U.S. Embassy in Tunis, Tunisia where the CIA secretly installed sophisticated microwave receivers and processors. A phone call was intercepted from a hotel in la Goulette, a seaside town on the Mediterranean Sea outside Tunis. The 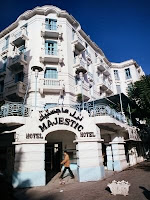 complete, two-way phone conversation was printed out in English translation.
Then, another hit! Stacey’s heartbeat quickened. Dictionary keywords snatched information from an innocent-looking, red brick building at 8 Palmer Street in downtown London, England. Every telex passing in and out of London is intercepted by Echelon computers operating within the walls of this charming, petite building with Daisy-filled window boxes. Stacey alerted her station chief, who analyzed the intercepts, matching the voice prints and subject matter with intel collected weeks ago from the Fusion Center in Trenton, NJ. CIA counterintelligence agents had been watching a warehouse owner there, who they deemed suspicious.
Stacey’s new intelligence was passed on to the Trenton Fusion Center, whereupon they determined that the time for surveillance and further intelligence-

gathering by HUMINT agents was over…it was time to strike. An hour later, surprised passersby watched as a warehouse in New Jersey was raided by 185 local police and FBI agents, along with dozens of other unidentified men wearing hoods to cover their identities. The shoulder-firing missiles were not found.

Simultaneously, cargo ships were boarded and searched by 180 NYPD officers and FBI agents in New York Harbor. Dozens of the faceless soldiers wearing hoods accompanied them as well. The missiles were not there, either. The New Jersey warehouse owner and his brother were taken away in handcuffs.
A half hour later, halfway around the world, a dozen armed men from the CIA’s Operations Division accompanied the local CIA station chief into the lobby of an unknown hotel in la Goulette, Tunisia. They could recognize “radical archer” by sight and if they captured him, would use enhanced interrogation techniques, if necessary, to find out where the missiles were.
Unfortunately for “radical archer,” he made a poor decision by visiting the hotel...they got him! He underestimated the real time, instant communication between ELINT and HUMINT technologies. The period between the time critical intelligence is gathered and when it is acted upon has been reduced to minutes... worldwide, thanks to Echelon. The CIA agents escorted the terrorist out of the hotel, shackled and wearing a hood, and quickly placed him in the cargo space of a large van, with "La Goulette Caterers" printed on the side panels.
Fifteen minutes later, "radial archer" divulged the location of the stolen missiles. The CIA agents, along with Tunis

Police officials, raided a home on the city's outskirts. The two dozen British Starstreak missiles sealed in their launch tubes were found. All were intact. Each tube was attached to an aiming unit for firing. The terrorists could track the target using the aiming unit's optically stabilized sight, allowing them to compute the precise trajectory to bring the missile together with the targets. Also found in the house were hand-written notes of flight numbers of American and British commercial airliners that fly into the Tunis-Carthage International Airport.
Stacey stared at her computer screen and breathed a sigh of relief when the ordeal was over. She wiped the sweat from her brow, arose from the Echelon and Dictionary program computers and walked into a secure lounge in the bowels of the NSA. She poured herself a cup of coffee and watched the TV screens. CNN, FOX and MSNBC broadcast  "Breaking News" that announced the simultaneous raids at the New Jersey warehouse and New York Harbor. No word of the happenings in Tunis, Tunisia was mentioned.
She sipped coffee and watched the shallow coverage of what happened and thought about the events that the American public would never learn of. She also knew the Department of Homeland Security would shortly release a well-vetted and sanitized press release, concerning the New Jersey and NY Harbor raids, to protect the Intelligence Community's sources and methods.
Stacey contemplated her role in the scheme of things and the super-secret work she does... Echelon's worldwide capabilities to spy on everyone’s computers, cell phones, faxes…whatever travels through the airways are swept up like dust off a carpet by a powerful vacuum cleaner. She wondered if the technology could, or would, someday be used for immoral purposes.
Oh well, plenty of “what if’s”, she thought. With the proliferation of WMD’s and the vulnerability of our wide open society, Echelon may be Democracy’s only hope. Stacey felt pleased inside at the thought of how many lives were saved by her today. There's some things the general public does not need to know.
So, that is Stacey's story. I understand why beltway partisan politics between conservatives and liberals is minimal regarding the recent uncovering of FBI and NSA spying on citizen cell phone usage...and so does Stacey. Compared to Echelon...it's a paltry affair.

Final Note: The European Union made a deal whereby their secret services and spy agencies were enabled to use the Echelon system via the United States espionage service of the FBI and NSA.

Robert Morton, M.Ed., Ed.S. is a member of the Association Of Former Intelligence Officers (AFIO) and writes the online Spy series, "Corey Pearson, CIA Spymaster in the Caribbean". The views expressed on this site do not represent those of any organization he is a member of. Reach him on the Secure Contact Form
Posted by Corey Pearson- CIA Spymaster at 7:14 AM