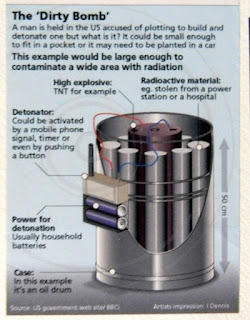 What are the chances of terrorists detonating a radioactive dirty bomb inside America? In writing the "Penumbra Database" spy thriller, I conducted much research into this possibility. U.S. intelligence has focused upon al Qaeda and ISIS in Afghanistan, Syria and Iraq, but perhaps it’s time to focus more on Iran.

Beyond the present focus on Iran's nuclear weapons ambitions, it remains the foremost sponsor of global terror and stands as the most formidable sponsor of terrorism by proxy in the world today. Even if the Trump administration gets Iran to cancel nuclear weapons research and development, it will continue to perfect a higher-grade nuclear fuel. The radioactive waste generated from a peaceful nuclear power plant may not be quite pure enough to spawn a nuclear detonation, but it could be used in a radioactive “dirty” bomb and detonated with conventional explosives. This is why  Iran's Terrorist Proxies are the real threat in her nuclear ambitions.


Hezbollah has rented apartments and planned bombing attacks in New York City. This terrorist proxy of Iran controls southern Lebanon and threatens Israel with high-powered weaponry supplied by Iran. Iran, Hezbollah, al Qaeda and other terrorist cells have networks that have trained Iraqi insurgents in the tactics of suicide bombing and the building of roadside bombs that have killed U.S. troops in Iraq and Afghanistan, and the attacks upon American institutions in Lebanon.


The book "The Secret War with Iran: The 30-Year Clandestine Struggle Against the World‘s Most Dangerous Terrorist Power" describes how Iran's Ayatollah and the mullahs came to power and what they intend to do with their new-found supremacy. It delves into the relationship between Iran and Israel before and after the Khomeini revolution, and gives a firm understanding of current events as well as the animosity Iran feels towards Israel and the U.S. for supporting the Shah. The rise of the Iranian monarchy and Khomeini's coming to power shows how American Intelligence failed to grasp what was going on in Iran.


The determination and ruthlessness of Iran's war of terror against the West is a historical fact and a dirty, radioactive bomb created from "stolen" Iranian plutonium detonated inside America, or Israel, is not a far-fetched possibility. Iran and Hezbollah have outsmarted and dealt telling blows to Israel and the U.S. We must not forget their bombings of the American Embassy in Beirut in April 18, 1983, the Marine contingent at the Beirut Airport on October 23, 1983, the Israel intelligence service facility at Tyre in Southern Lebanon in November 1982, and the US. Army installation at Khobar in Saudi Arabia. These attacks were devastating tactical and strategic successes.


Hezbollah drove the U.S. from Lebanon and put Israel’s Mossad into a process of denial which led to their un-preparedness and failures of the 2006 War. America must acknowledge Hezbollah's terror successes and respect their operatives, like Imad Mougniyeh, who was behind most of the spectacular operations that killed more Americans than any terror force before 9/11.


We must refrain from accepting false premises to appease our Western minds, like believing Shiite and Sunnite enmity will make Hezbollah ineffective. The Shiite followers  of Mougniyeh and the Sunni operatives of al Qaeda both despise America and the West and are capable of working together to detonate a radioactive dirty bomb inside America's heartland, enriched with "stolen" Iranian plutonium.


Connect the dots: Hezbollah rose to power in Lebanon while

an Israeli traitor supplied Iran with the basics for its chemical WMD... Iran dealt with the Russians to acquire the technology for a nuclear weapon... that technology found its way elsewhere via Pakistani nuclear scientist Abdul Kadeer Khan. Meanwhile, Iran fools the IAEA and the world while it continues to progress towards possessing nuclear weapons.


Meanwhile, Iran and Syria have rearmed Hezbollah and taught Hamas in Gaza sophisticated war tactics in anticipation of their next round with Israel, and Iran continues to support terrorist forces in Iraq through the patronage of the Iranian revolutionary guards.


U.S. and Israeli intelligence services have tried to outpace Iran and its terrorist proxies- Israel’s stealth attack on Syria’s nuclear facility (much to Iran’s chagrin), the July 2008 assassination of Imad Moughniyeh Askari, and the 'mishap' at the VX gas facility at al-Safir are a few examples.


Still, Hezbollah remains a sophisticated adversary and the failures of the 2006 war have bolstered Iranian-Syrian allegiances. Iran has become an even more aggressive exporter of its own revolution and is determined to acquire nuclear weapons and to supply Hezbollah proxies with enriched plutonium to detonate radioactive “dirty“ bombs inside Israel, or  America.