Valerie Plame shows how being a CIA NOC is dangerous business 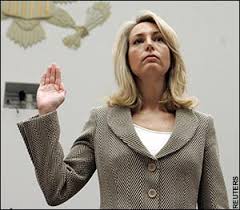 Valerie Plame worked as an undercover CIA NOC (Non-Official Cover). Being a NOC is dangerous business. This article shows the importance of the deep cover they use, since they lack official cover and have no diplomatic immunity to protect them, if caught. The precious, concealing commodity that the intelligence community calls “cover” is all they have. They rely on lies and props, from false names to phony front companies, to disguise their true identity and purpose.
Although often cast in binary terms — an operative is either under cover or not — there are distinct categories of cover that CIA agents use, and an almost endless list of components. Some cover is tissue-thin and disposable. Other arrangements are so layered and deep that they anticipate hostile probing of every facet of a person’s life.
Valerie Plame’s cover, in which she posed as a private energy consultant while actually working for a CIA department tracking weapons proliferation, was somewhere in the middle. Here’s an article I wrote on Valerie Plame some years back, but it explains the dangers, and importance, of NOCs: Karl Rove and Dick Cheney made all Americans ‘Fair Game’.