Now that the latest intelligence on Iran's nuclear bomb ambitions have indicated they are well on their way to becoming a nuclear threat, OSINT News is publishing this article. The Heritage Foundation created a video that explains the critical need to re-initiate and completely fund a Strategic Defense Initiative (SDI) program... a anti-ballistic missile (ABM) defense program. With countries like North Korea (Photo 1: below) and Iran acquiring the capability to launch ICBM's, our negotiation 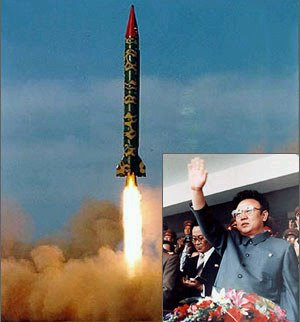 positions in the future will be severely weakened.

Such countries, as they build and develop their ICBM numbers, payloads, and accuracy have the capacity to change life as we know it in the U.S. in less than 33 minutes. The documentary 33 Minutes: Protecting America in the New Missile Age is a one-hour documentary produced by the Heritage Foundation that tells the story of the fastly developing threat foreign enemies pose to America. The truth is brutal - no matter where on Earth a missile is launched from it would take 33 minutes or less to hit the U.S. target it was programmed to destroy.

OSINT News believes we should rethink missile defense. The Heritage Foundation video demonstrates that our technology has advanced so much since President Reagan's "Star Wars" SDI days, that we now can not only hit a bullet with a bullet, but we can hit a spot on a bullet with a bullet. Still, the SDI program is lacking in adequate funding and is incapable of defending the U.S. against ICBM attack. Watch the "33 Minutes" trailer video.


Nuclear proliferation around the world, and the threat of a ballistic missile attack of some kind is mounting as more and more countries obtain rocketry and nuclear technology. The ongoing threat toward America is also accelerating due to the fact that there are many rogue nations and non-state terrorist organizations who either have or are seeking ballistic missiles and nuclear technology.

The challenges of protecting America and its citizens for President Obama's administration are great. Featuring rare footage and in-depth interviews with leading experts in the field, 33 Minutes is the definitive documentary exposing the untold vulnerability we all face and the action plan necessary to revive a strategic missile defense system that America uniquely can develop, maintain, and employ for its own defense and for the peace-loving world's security. 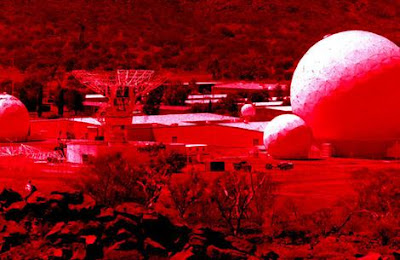 OSINT NEWS believes the U.S. should seriously consider creating a global SDI system. After all, didn't we plan on having one in the Czech Republic? (Scroll down to Photos 8 & 9). As North Korea sells ICBM and nuclear technology to rogue nations and threatens to use her ICBM's; as Iran continues to develop ICBM capabilities (photos below); and as the world frets over the Taliban taking over in Afghanistan, we believe a Global Strategic Defense Initiative (SDI) program should be developed fully. North Korea has threatened use of her missile warheads offensively if the world places sanctions upon her and last year President Asif Ali Zardari of Pakistan voiced concern on the danger of his country's nuclear weapons falling into Taliban hands. At the same time, he states that Pakistan's nuclear arsenal is safe and in good hands.

Some in India say President Zardari's statement was merely a "ruse to garner as much funds as possible from the US and the West to spirit away to his accounts." True, we gave billions of military aid to Pakistan to better arm the Frontier Corps army so they could drive the Taliban and al Qaeda out of their provinces. As we know now, it was never spent for the purpose it was intended. Instead, U.S. military funding to Pakistan was spent on offensive weapon systems aimed at our friend, India. A Pentagon document disclosed that aid given by the U.S. has been used to build up and strengthen Pakistan's armed forces armory against India. As one man from India stated, "Pakistan is so obsessive with India."
So, why not develop a fail-proof, anti-ballistic missile (ABM) system...soon? The current ABM system that protects America's shores should be intensified qauntitatively and qualitatively, with the new failure-proof technologies. Once accomplished, the U.S. could focus on our overseas friends, offering to install fail-proof 2nd and 1st layer ABM systems in the "weaker," less-developed countries. As Iran, et al, nears completion of nuclear-bomb construction, they will want to acquire nuclear technolgies and rocket propulsion systems to protect themselves from these threat-mongering neighbors.

Although OSINT News believes Israel and/or the U.S. will destroy Iran's nuclear-bomb making facilities, we pose these four futuristic reasons why we should proceed in exporting our anti-ballistic missile defense system overseas:
(1) Diplomatic upside: We could install this fail safe SDI program to our nervous friends around the world...which would include on-station American specialists and advisors. Such a system would be installed as a missile defense program tailored-made for each countries individual needs and threatened status. Scroll down (Photos 4 & 5) and view the map of countries within Iran's Sahab-3 missile range. By offering to install the U.S. failure-proof ABM system in each of them, Iran's hegenomy goals would be negated. And, diplomatically, the U.S. would be looked upon as a protector.

(2) Economic feasibility and Self-sustainment. The system could be free from unstable U.S. federal funding and political whims. We could lease or 'rent out" such a system to our nervous allies. The copious amounts of monies taken in would pay for not only the cost of operation, but for massive and continual R&D to improve the SDI system. It would be an enduring and self-sustaining system, funded from foreign clients. Perhaps, instead of cash payments, we could be reimbursed with oil...just a thought!

(3) Nation-Empowerment. No longer would “weaker” nations acquiesce to the desires of rogue neighbors. As the heavyweight prizefighter Jack Dempsey once said, “The best offense is a good defense.” Such a system, certainly, would be a peaceful, defensive venture. But, it
would carry a deadly message to rogue regimes who see their power, dominance and threat-mongering capabilities dwindle. The "weaker" nations would be more inclined to join the world community's push for peaceful existence rather than stay neutral and cower before a derelict neighbor. (Photo 3 above)- Test launch of Pakistan's Hatf-3 {Ghaznai} SRBM in October, 2003. It's capable of delivering 20 kiloton nuclear warhead.

(4) Create Agenda for Global Peace Agenda. Participating countries would meet regularly to discuss connectivity, since each SDI system could communicate with another. The worldwide SDI system would be installed and managed by the U.S. so administrative and daily managerial difficulties could be worked out. There would also be a treaty binding participating nations together: they must protect each other with this system. For example, if Iran launched a nuclear-armed missile attack against another, and their missile passed over several participating countries, each would attempt to destroy it, even though it wasn’t targeted at them. Even if Iran's nuclear-bomb capabilities were destroyed by Israel, other WMD payloads could be delivered atop their sophisticated missiles. On the same note, participating countries that do not possess long-range missiles or nuclear technology, will have have the ABM installations removed if they pursue these ventures.
Hopefully, a fully-funded, full-proof ABM system will be perfected by the U.S.
(Photo 4 above) Iran displaying Sahab-3 MRBM in September 3, 2003 parade

(Photo 5 below) Visual of 2,000 km range of Iran's Sahab-3 missile fired from within Iran 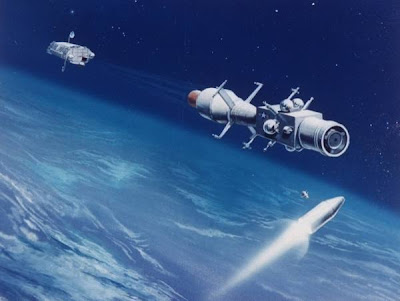 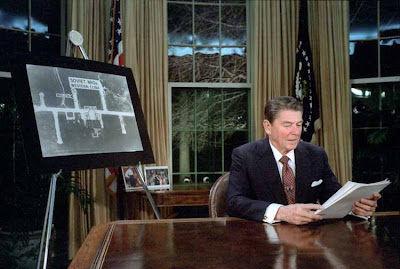 March 23, 1983
"I call upon the scientific community in our country, those who gave us nuclear weapons, to turn their great talents now to the cause of mankind and world peace, to give us the means of rendering these nuclear weapons impotent and obsolete. Tonight, consistent with our obligations of the ABM treaty and recognizing the need for closer consultation with our allies, I'm taking an important first step. I am directing a comprehensive and intensive effort to define a long-term research and development program to begin to achieve our ultimate goal of eliminating the threat posed by strategic nuclear missiles. This could pave the way for arms control measures to eliminate the weapons themselves. We seek neither military superiority nor political advantage. Our only purpose -- one all people share -- is to search for ways to reduce the danger of nuclear war.

My fellow Americans, tonight we're launching an effort which holds the promise of changing the course of human history. There will be risks, and results take time. But I believe we can do it. As we cross this threshold, I ask for your prayers and your support.

Thank you, good night, and God bless you." 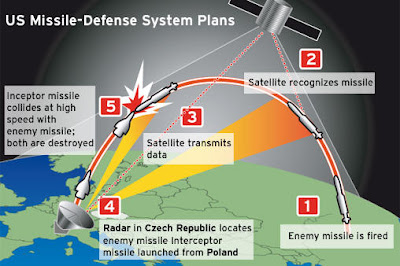 (Photo 9 below) What step-4 will look like when Czech-based radar system directs U.S. interceptor missiles 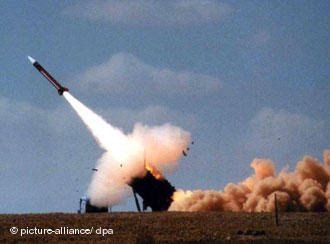 Robert Morton, M.Ed., Ed.S. is a member of the Association For Intelligence Officers  (AFIO) and writes about the U.S. Intelligence Community (IC). A portion of Ad revenues generated on this site is donated to the AFIO. His ideas are his own and do not represent those of any organization he's a member of. Contact him on the secure Bpath Mail Form.

Posted by Corey Pearson- CIA Spymaster at 1:37 AM