An article in Pakistan Today describes how The Human Rights Commission of Pakistan (HRCP) warned the country not to be sympathetic to militants and to denounce all groups who are. On September 3, the HRCP warned all institutions, especially political parties, of the catastrophic consequences of their failure to resist militancy. The commission said, "The barbaric beheading of 12 Pakistani soldiers and killing of others by the Taliban adds a new grisly chapter to the long list of outrages committed by extremists."

On the same note, in Dawn, an article mentioned on September 4, 2012 that Pakistan is ready to give the Taliban 'safe passage'. Pakistan has agreed to provide safe passage to the Afghan Taliban leaders willing to participate in reconciliation talks with the Afghan Government. An unnamed US official said that the US and Pakistan had formed a working group to facilitate safe passage to Afghan Taliban leaders willing to visit Kabul for talks with Afghan officials. 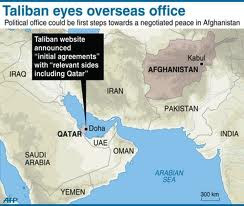 There is much opposition to peace talks with the Taliban, for they have earned many enemies. In 2008, they conducted an
Indian embassy bombing in Kabul, Afghanistan. It was a suicide bomb attack on July 7th at 8:30 AM local time and 58 people were killed and 141 wounded. The suicide car bombing took place near the gates of the Indian embassy while the officials were trying to get inside. It was the deadliest attack in Kabul since the fall of the Taliban in 2001. The embassy reopened on 14 July 2008 after one week of closure. Interestingly, on August 1st of that year, The New York Times reported allegations by unnamed U.S. officials, who claimed that members of Pakistan's Inter-Services Intelligence (ISI) agency had aided the attack. The claim was strongly denied by Pakistan. During the 15th SAARC  summit in Colombo, Sri Lanka, Pakistan's Prime Minister Yousuf Raza Gilani assured India that his government would carry out an independent investigation of the attack.

Another "earned" enemy of the Taliban is the CIA. Remember the December 30, 2009 Camp Chapman suicide attack against Forward Operating Base Chapman, a key facility of the CIA in Afghanistan? The CIA hasn't forgotten. The base was located near the eastern Afghan city of Khost, in a stronghold of the Taliban movement. One of the main tasks of the CIA operatives stationed at the base was to provide information for drone attacks against Taliban fighters in Pakistan. Seven CIA operatives, including the chief of the base, and an officer of Jordan's General Intelligence Directorate were killed in the attack, and six others were seriously wounded. Pakistani Taliban have claimed responsibility for the attack, and western intelligence officials identified the attacker as Humam Khalil Abu-Mulal al-Balawi, a Jordanian doctor. While the CIA thought that al-Balawi would be an important informant, who could help the intelligence agency to capture top leaders of the Taliban and of al-Qaeda, he actually was loyal to insurgents fighting against the U.S.-led military forces in Afghanistan. The bombing was the most lethal attack against the CIA in more than 25 years, and a major setback for the agency's operations in the region.

However, OSINT News believes that the CIA has rightfully avenged the deaths of these young case officers. We might also add that it was the CIA that spearheaded the battle against terrorism after 9/11. A small band of CIA operatives
went on a treacherous mission, while the rest of us were still in shock from the attacks on the Pentagon and Twin Towers. These early CIA missions in Afghanistan were what led to the ousting of the Taliban from that country.

But, here we are now. The United States and its allies have been fighting the Taliban and al-Qaeda in Afghanistan for a decade and neither side is winning. The US draw down has begun and the troops are gradually coming back home. But, a significant number of US combat troops will remain in Afghanistan until at least 2014, perhaps longer, depending on the situation on the ground and the outcome of the US presidential election this November. The Taliban will continue with their increased suicide bombings and guerrilla ground attacks against western forces, while US policymakers and the American public try to find a way out whilst restoring peace and stability to Afghanistan.

It's kind of like trying to change a flat tire...while the car is still moving! The US government will, no doubt, continue with what the American public wants... an immediate withdrawal of all troops. However, the US will maintain an open-ended, but greatly reduced military presence. Many suggest that a strong, legitimate central Afghanistan government is far from likely to emerge and that fewer coalition forces, used in creative ways, may have better effects on the ground than a larger, more conventional presence. They say that even though Pakistan should not be pushed too hard, so as to avoid sparking social chaos there, Afghanistan's other neighbors can and should be encouraged to become more actively involved. Most agree that there will never be complete peace in Afghanistan, but a self-sustaining security system able to restore order swiftly in the wake of violence is attainable.

We shall see. US and coalition forces on the ground in Afghanistan are a mere present-day snapshot of the country's military history. The Taliban and warlords of Afghanistan trace back to over  2,500 years of conflict, from clashes against the Persians, Greeks, and British, through the defeat of the Soviet Union in the 1980s and the rise and fall of the Taliban, until their recent come back.

OSINT News, during its research into the issue of negotiating with the Taliban, ran across an enlightened book called An Enemy We Created by Alex Strick van Linschoten and Felix Kuehn.  In essence, what they alluded to is that if the US conducts peace talks with the Taliban, then we may weaken al-Qaeda. Let us explain! According to van Linschoten and Kuehn, the belief is widespread that the Taliban and al-Qaeda are synonymous, that their ideology and objectives are closely intertwined, and that they have made common cause against the West for decades.
Not! In An Enemy We Created, both authors debunk this myth and reveal the much more complex reality that lies beneath it. Drawing upon their unprecedented fieldwork in Afghanistan, as well as their Arabic, Dari, and Pashtu skills, the authors show that the West's present entanglement in Afghanistan is predicated on the false assumption that defeating the Taliban will forestall further terrorist attacks worldwide. While immersing themselves in Kandahar society, both men interviewed Taliban decision-makers, field commanders, and ordinary fighters, thoroughly exploring the complexity of the relationship between the Taliban and al-Qaeda and the individuals who established both groups. They found that from the mid-1990s onward, the Taliban and al-Qaeda diverged far more often than they converged. They argue that this split creates an opportunity to engage the Taliban on two fundamental issues: renouncing al-Qaeda and guaranteeing that Afghanistan will not be a sanctuary for international terrorists. Yet the insurgency is changing, and it could soon be too late to find a political solution. The authors contend that certain aspects of the campaign in Afghanistan, especially night raids, the killings of innocent civilians, and attempts to fragment and decapitate the Taliban are having the unintended consequence of energizing the resistance, creating more opportunities for al-Qaeda, and helping it to attain its objectives.

OSINT News researched the book, which is not advertised here, and believes it helps to untangle the myths from the realities in the relationship between the Taliban and al-Qaeda and offers a deeper understanding of what is really happening in Afghanistan. Although it is not advertised on this site, we still recommend you purchase it elsewhere. We urge you to take the Poll in the upper right-hand narrow margin: "Do you favor peace talks with the Taliban?". Perhaps, it would be a good idea. At least we'd get a better understanding of Taliban members, such as Juma Khan, David Hicks, Abdullah Mehsud, Sayed Rahmatullah Hashemi, Mir Alam Shah, Abdul Salam (Taliban Chief Justice), Ghulan Mohammed Hotak, Ghulam Nabi, Rahmatullah Safi, and Mullah Rahmatullah.
Who knows? Perhaps we could have met the deceased
Baitullah Mehsud, the 35 year-old leading militant in Waziristan, Pakistan, and the leader of the Taliban umbrella group, Tehrik-i-Taliban Pakistan (TTP), which he formed from an alliance of five pro-Taliban groups in 2007. He, according to U.S. military analysts, commanded up to 5,000 fighters and was behind numerous attacks in Pakistan including the assassination of Benazir Bhutto. If we were negotiating with him, could we have prevented Bhutto's assassination? Perhaps, we should initiate on-going negotiations with the Taliban. Why not give it a serious try? After all, it hasn't been tried in 2,500 years. ﻿
Robert Morton, Ed., Ed.S. is a member of the Association Of Former Intelligence Officers (AFIO). A portion (10%) of this site's ad revenues is donated to the AFIO. The views expressed on this site do not represent those of any organization he is a member of. OSINT News is always looking for different perspectives regarding the Intelligence Community- got a thought, article or comment you'd like to submit? Contact us on the  SECURE CONTACT FORM
Posted by Corey Pearson- CIA Spymaster at 9:28 AM