HOW WE GOT TO WHERE WE ARE IN AFGHANISTAN

I thought the book Ghost Wars by Steve Coll was quite revealing. It delves into how the war against the Soviets began and how the CIA became involved during the Cold War years. It brought remembrances of when the Soviets invaded Afghanistan and the fragile oil shipping routes to the West were threatened.

After Afghanistan, the Middle East oil countries were next. At least, that's everyone thought...you know, the domino effect.
Didn't happen. Factions in Afghanistan revolted against the Soviet authority. The CIA supplied the rebels with money and weapons, like Stinger missiles. They also funded training camps to train the people who came to help fight the Soviets. One of these was the billionaire Sheikh Osama bin Laden. Bin Laden at the time had close relations with Saudi Arabian intelligence and various Arab charities and provided money for the rebels and for humanitarian aid for the population.

Read "Corey Pearson- CIA Spymaster in the Caribbean" and learn how the CIA and Intelligence Community operate. First 3 episodes online for free!
Ghost Wars describes how the Taliban was formed as a small militia group which opposed all of the corruption, it quickly grew. Mullah Omar and his people eventually received the support of the Saudis and Pakistanis. When the Russians withdrew, they left Afghanistan in the midst of a civil war. Massoud and his Northern Alliance were eventually forced into the northern part of the country. The United States declared neutrality and refused to overtly support any faction.

Bin Laden also left Afghanistan, but the al-Qaeda had already been formed and he was viewed as a rising leader in the world of radical Islam. As a result of this anti-royal stance and criticism of the Saudi royal family during the Gulf War, he was expelled from Saudi Arabia and went to Khartoum, Sudan. After several years he was asked to leave and moved to Afghanistan where the Taliban was now in control.

The training bases that had been used to train fighters against the Soviets were now being used to train Arab jihadist terrorists. In addition there were hundreds of Stinger missiles in the country that the various factions had that could be used to shoot down passenger airplanes. The CIA was quietly trying to buy them, which gave them a reason for covert activities in Afghanistan.

As bin Laden, al-Zawahiri and al-Qaeda grew stronger, and more and more terrorist acts were traced to them, the United States tried to have them captured. This was a new generation of terrorists that they were trying to cope with. The new kind of terrorist was different from the groups of the past. They were recruited in the madrasses and trained in Afghanistan as was the Hamburg cell and those involved with the September 2001 attacks on New York and Washington. Even today, these madrasses continue to be terrorists training schools that teach hatred toward the U.S. and the West.

Ghost Wars tells how the seemingly distant tribal revolts in Afghanistan culminated in the attacks on American soil. I highly recommend Coll's book to those who want to gain an in-depth understanding of the Afghanistan war and how America and the CIA fit into it. You'll learn of the inner workings of the CIA and how their hands were pretty much tied at the time.

But, here we are in the middle of an unpopular war that's supposedly winding down. Yeah, right. As a member of the Association For Intelligence Officers (AFIO), I attended a seminar where Michael Scheuer, ex-head of the CIA's bin Laden unit, said, "The war in Afghanistan is mathematically impossible to win." I agree with Scheuer's thinking, and  believe that the Taliban and al Qaeda will re-emerge in force in Afghanistan after we pull out.

During an interview with Press TV, former CIA agent Ray McGovern said, "The Afghan Taliban does not pose a threat to American national security". Three additional CIA experts  claim that our troops in Afghanistan are side-tracking going after al Queda and actually increasing the likelihood that American civilians will be killed in a future terrorist attack. This short video (below), "Part 6 of Rethink Afghanistan," features three former high-ranking CIA agents who explain why:

A year ago, a CNN poll that revealed that more than six in ten Americans (63% to be exact) oppose the U.S. war in Afghanistan, with 56 percent of the public believing that things are going badly for the U.S. in Afghanistan. Only 35 percent said they support the U.S. mission in Afghanistan.


President Obama's trilateral strategy in Afghanistan seems to be a well-thought out one. But, will it succeed? 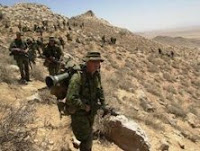 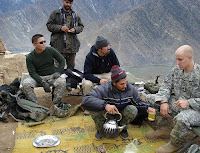 American troops drinking tea with local Afghans
Robert Morton, M.Ed., Ed.S. is a member of the Association Of Former Intelligence Officers (AFIO) and writes about the online spy series "Corey Pearson- CIA Spymaster in the Caribbean." His ideas are his own and do not represent those of any organization he's a member of. Contact him on the Secure Contact Mail Form.
Posted by Corey Pearson- CIA Spymaster at 9:32 AM