Tweet      If you're the 5th Tweeter, you win the fake spy camera below. Whoa! Did I say fake? In the spy series Corey Pearson- CIA Spymaster in the Caribbean, Corey installs fake surveillance cameras outside and inside all the safe houses throughout the Caribbean islands. The bad guys don't know the difference and they shy away- Read "Description" below.

Here's all you gotta do: 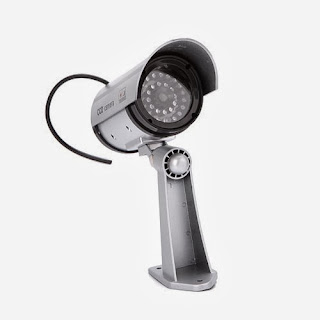 Description
Deter robbery, theft, and vandalism without the high cost of a real security camera. Place this in your home or business and even the most sophisticated criminals will think the premise is guarded by a high-tech surveillance system and will go search for an easier target. In fact, this is an actual surveillance camera that has been modified into a "dummy" or fake security camera. This unit does contain a flashing light.
It features authentic video cable and a fully adjustable mounting bracket that will let you install it  quickly and easily using the included stainless steel screws. The camera requires 2 AA batteries which are not included.
Posted by Corey Pearson- CIA Spymaster at 10:57 AM