It's not "business as usual" for the Starbucks franchise housed inside the CIA headquarters in Langley, VA. This particular chain, code-named "Store Number 1", operates much differently than their other 12,000+ stores in the U.S.- not surprising when it must accommodate clandestine spymasters working for the most powerful spy organization in the world. 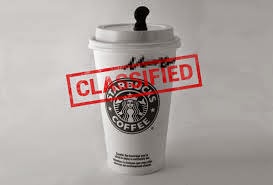 Servers do not ask for the customer's name (which they normally write on the coffee cup to expedite things), for undercover agents grow uncomfortable when someone asks for it. They can't give the Starbucks' server their a.k.a. handles either, for that nom de plume, if discovered by the wrong people, could get them killed on an overseas assignment. Even the receipts the baristas hand back have "Store Number 1" cryptically printed on them.
Each maître d' goes through a robust interview and background check before they are even told that they will be working at the CIA Starbucks. There are nine baristas working there and whenever they leave their work area, a CIA "minder" escorts them. All are often briefed about security risks and must report if someone is really interested in where they work or asks too many questions about their employment. They can't even blow their own horns about working inside the CIA at nightclubs or parties and, if asked, can only tell friends, family members and acquaintances that they work in a federal building.
And what about the wonderful Starbucks Awards program with those loyalty deals? It would be great to offer America's spy force this great program where they can get free drink and food rewards, custom offers, early access to new Starbuck products and make easy payments with their mobile app. Well, the program is absent at Store Number 1, for CIA clandestine operatives could be potentially exposed if the data on their loyalty cards fell into the wrong hands.

Yes, Store Number 1 is a cloak-and-dagger Starbucks operation. It is also one of their busiest, for the customers remain captive, all day long. The intelligence analysts, undercover operatives and case officers, economists, engineers, geographers and cartographers who work on the CIA's highly-secured campus are not permitted to leave the "office" and go downtown for a coffee break in the middle of the day. The caffeine-addicted staff flocks to "stealthy Starbucks", as they code named it, for a respite from gathering intelligence, planning covert operations, and preparing the Presidential Daily Brief (PDB) that provides the president of the United States with up-to-the-minute intelligence on sensitive international situations.

Those working at the CIA need and deserve a break from their windowless cubicles to sip an Espresso with bittersweet mocha sauce and steamed milk topped with whipped cream while munching on a buttery muffin stuffed with seasonal blueberries, yogurt and honey. Hopefully, they can unwind at Store Number 1 and return refreshed to their duties. After all, if they don't remain attentive and vigilant for hours on end as they pour through classified documents...people could die.

Robert Morton, M.Ed., Ed.S. is a member of the Association of Former Intelligence Officers (AFIO) and publishes the online spy series "Corey Pearson- CIA Spymaster in the Caribbean". His views are his own and do not represent those of any agency he is a member of. We welcome comments and suggestions- contact OSINT News on the Secure Contact Form.
Posted by Corey Pearson- CIA Spymaster at 10:32 AM