I watched a CNN interview on Monday (12/08/14) with Congressman Mike Rogers (Michigan) regarding his displeasure over the release of the CIA Torture Report. I agree with him, and do not believe it was prudent for the Senate Intelligence Committee to approve the release of this report on the CIA's post-9/11 interrogation program. People in foreign countries will be placed in harm's way as soon as it is declassified and subsequently broadcast in the news media.

In addition, despite the current news media reporting and grandstanding machinations by politicians, no new surprises or revelations exist within the document. As a member of the Association Of Former Intelligence Officers (AFIO), I conducted much OSINT research and interviewed several professionals in the U.S. Intelligence Community (IC) regarding the CIA's Torture Report, and could not uncover any startling new details about the CIA's detention and interrogation program, nor could I find evidence that the CIA lied to the Senate Intelligence Committee about it. 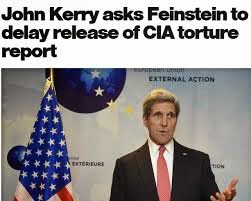 I do believe, from the very beginning, that our senators were fully aware of the intelligence operations undertaken after 9/11. Senate Intelligence Chair Dianne Feinstein knew that the CIA created clandestine 'black sites' and used 'enhanced-interrogation techniques' in each of them, even though she has spoken negatively of them.
I wanted to hear the facts about the EIT program first hand, so last year I planned to travel to Tysons Corner, VA to hear Jose A. Rodriguez, Jr. talk at the Association Of Former Intelligence Officer's (AFIO) Summer Luncheon. Unfortunately, I couldn't make the meeting due to illness; however, I learned much about the presenter, Rodriguez, who is a former CIA National Clandestine Service Director and was the person who, after 9-11, led the U.S. counterterrorism operations and oversaw the highly controversial enhanced interrogation technique (EIT) program, which was created to obtain vital and timely intelligence from terrorists bent on killing as many Americans as possible. He also served the U.S. for twenty-five years as an undercover officer before bringing his wealth of field knowledge to the CIA’s Counterterrorism Center (CTC).
Rodriguez was one of America’s top undercover operatives and used “hard measures” to thwart terrorist’s plans that targeted the U.S. In short, he was bent on saving thousands of American lives...lives that Sen. Diane Feinstein and most of our senators and congressmen also thought were in imminent harm's way at the time.
At the AFIO lecture, that I missed, Rodriguez discussed how the CIA’s undercover operations and tactics were implemented during the George W. Bush presidency, how they were approved at the highest levels of the U.S. government, how they were certified as legal by the Department of Justice, and why they were supported by bipartisan leadership in the congressional intelligence oversight committees.
Rodriguez and the CIA have undergone relentless criticism and smear campaign rhetoric. After reading his AFIO Summer Luncheon lecture transcript, conducting personal OSINT research on EIT's, and interviewing several intelligence community professionals, I wonder if the current critics of the EIT program forgot the stark realities of 9/11.
Neither did they offer sensible alternatives to the program in the post-9/11 chaos, other than inaction or weak responses towards terrorist detainees. The EIT program was, indeed, an appropriate response to the deaths of thousands of innocent victims trapped in the twin-towers, helplessly pinned inside the Pentagon or held hostage on board the commercial airliner that crashed in a rural Pa. countryside.
Americans grieved and were anxiety-ridden at the time, for they did not know if future terrorist attacks were in the making! But, as the shock of 9/11 faded, the support that the CIA needed gave way to shortsighted and potentially dangerous political correctness. The tools for effective counterintelligence and counterterrorism was neutralized by lack of funding and ineffective legislation. America's counterintelligence agents were hamstrung, spread thin, overworked, and became subject to ridicule and prosecution…as was Rodriguez himself.


Journey through the Caribbean Islands in the "CIA Spymaster Corey Pearson" online spy series. Beginning complementary episodes sent immediately!
In his book “Hard Measures”, Rodriguez reflects on the justification for the techniques used and why they were necessary, why they worked, and how, ultimately, they saved American lives and contributed to the capture of the world’s most-wanted terror operatives, including bin Laden.
Still, he was ostracized by the media. I watched the 60 Minutes program that grilled Jose Rodriguez and concluded it was an unbalanced 'script' skewed heavily by the critics of the CIA's EIT program, including some grandstanding politicians who claimed to be "experts" and unnamed others who stood on the sidelines to lob stones at officials, like Rodriguez, who were in the post-9/11 trenches making tough, real-time national security decisions.
During the 60 Minutes bashing, he showed no regrets about the CIA using "enhanced interrogation techniques". His interviewer, Leslie Stahl, exhibited intimidating body language, including raised eyebrows. It was quite obvious that she considered EIT’s unnecessary, evil and unbecoming of America. Through her criticism, Stahl tried to make her prejudice plausible, but failed. She drilled Rodriguez about water-boarding and other EIT methods, but he reminded her that they proved essential in getting information from suspected terrorists. He emphasized that high-level detainees like Khalid Sheik Mohammed and Abu Zubaydah provided their best information only after harsh treatment.
We'll never know how many American lives that CIA Case Officer Rodriguez and the CIA EIT program saved; even those who compiled the Senate Torture Report have no idea, either. I only hope the news media uses much prudence in reporting the details of this document when it is declassified.

Robert Morton, M.Ed., Ed.S. is a member of the Association of Former Intelligence Officers (AFIO) and publishes the online spy series "Corey Pearson- CIA Spymaster in the Caribbean". His views are his own and do not represent those of any agency he is a member of. We welcome comments and suggestions- contact OSINT News on the Secure Contact Form.
Posted by Corey Pearson- CIA Spymaster at 6:30 AM