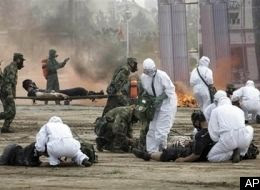 A recent poll revealed an increasing number of Americans fear a catastrophic terrorist attack may occur inside the U.S.-  a whopping 74 percent believe such an attack will happen. A survey conducted by national pollster McLaughlin and Associates revealed that 74.2 percent of likely voters fear terrorists affiliated with the Islamic State will strike U.S. targets if they aren’t stopped.
Americans are deeply worried that a "catastrophic terrorist attack" by Islamic militants, like the one on the Paris magazine staff, will happen in the United States. Worse, they believe the terrorists will use chemical or biological weapons, not just the guns used in Paris on the staff of the humor magazine Charlie Hebdo, which published cartoons the extremists didn’t like.

What are your thoughts on the possibility of such an attack inside America? What type of weapons do you think they are likely to use? Please take the poll below. You can instantly compare your answers with those of others.


Robert Morton, Ed., Ed.S. is a member of the Association Of Former Intelligence Officers (AFIO) and writes the online spy novel series "Corey Pearson- CIA Spymaster in the Caribbean".  The views expressed on this site do not represent those of any organization he is a member of. Contact him on the Secure Contact Form
Posted by Corey Pearson- CIA Spymaster at 6:48 PM