This post focuses on the major findings and implications of the Paris and San Bernardino terrorist attacks by radical Islamist sleeper attack cells that infiltrated both the U.S. and France.
France's main intelligence service is equivalent to the United Kingdom's MI6 and the United States' CIA. Yes, the General Directorate for External Security (DGSE) is France's external intelligence agency. It operates under the direction of the French ministry of defence and works alongside the DGSI (the General Directorate for Internal Security) in providing intelligence and national security, notably by performing paramilitary and counterintelligence operations abroad. As with most other intelligence agencies, the details of its operations and organization are not made public. Its HQ is in the 20th arrondissement of Paris. Former U.S. Defense Secretary Robert Gates has praised the DGSE (with respect to economic intelligence). Gates believes it is an extremely capable intelligence agency that is as stealthy as the Chinese spy agency, for they've been doing it a long time. 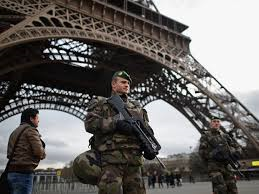 *At least two IS terrorists who killed 130 people across Paris entered the EU by blending in with refugees arriving in Greece from Syria and Iraq, where the militant group has strongholds. They hopscotched around the continent while preparing for the assault, assembling arms, explosives and rental cars used to carry out shootings. That's why Pierre-Henri Eisenschmidt joined hundreds of flag-waving countrymen in an idyllic French village near the German border to rally for what he considers vital to stopping terror attacks: a pending National Front victory in regional elections. Wall Street Journal

*France's spy service, the DGSE, is equivalent to England's MI6. Unfortunately, the DGSE was unaware that Abdelhamid Abaaoud was in the country until after the Paris massacre. Bernard Cazeneuve, the French interior minister, is angry because other states had provided no intelligence on his whereabouts and demands that all of Europe “pull itself together” and share intelligence. A senior member of the DGSE said: "It has to be said: Schengen is a sieve. A guy with a CV and history like this, wherever he turned up in Schengen, he should have sparked a red flag."


*Guide to the Study of Intelligence: French Intelligence. This is a paper provides a brief history, and outlines the structure and oversight of French intelligence services in the light of the counter-terrorism paradigm that dominates today’s politics.

*French counterterrorism forces on the move! They raided 2,235 homes and buildings, arrested 232 people and seized 334 weapons, of which 34 were war-grade. During the intense offensive against radical jihad, which is in its 15th day, "We have seized one-third of the quantity of war-grade weapons that are normally seized in a year,” reports French Interior Minister Bernard Cazeneuve. Along with the arrests and seizure of arms, police raids confiscated illegal narcotics at 165 different locations. Breitbart

*The aftermath of the Paris attacks, implications for France and possibility of such attacks happening in the UK. Royal United Services Institute (RUSI) is the world's oldest independent think tank on international defence and security. I use RUSI as a source often and this article has implications for the U.S. and other Western countries as well.  RUSI

*The Paris attacks and confronting ISIS. French warplanes struck ISIS targets in Syria two days after attackers linked to the terrorist group carried out a deadly coordinated assault on Paris. In this Call with the Experts, RAND terrorism expert Brian Michael Jenkins offers insights into ISIS's strategy and capabilities, how the West might respond, and what the attacks could mean for the Syrian refugee crisis. Rand Corporation

*In the wake of the Paris attacks, many are asking how President Obama got the ISIS threat so wrong. In 2021, according to the Defense Intelligence Agency (DIA), he ignored repeated warnings from the intelligence community, our allies, and even his own national security team.

*No simple explanations for Paris attacks: The French authorities have named one of the attackers who terrorised Paris on November 13 ass Omar Ismail Mostefai, a French national who was reportedly known to the security services as having been radicalized as long ago as 2010. The announcement that Mostefai was apparently a radicalised French citizen will probably only feed into simplistic single-issue explanations for why the attacks took place – such as that they were provoked by jihadists enraged at Western foreign policy. Radicalisation Research

*Former CIA Analyst Fred Fleitz says the San Bernardino shooters had too much weaponry and too many bombs for the mass killing not to be a terrorist attack: "This is obviously radical Islamist terrorism or radical jihadist terrorism." Fleitz believes that Syed Farook and Tashfeen Malik had likely planned a much larger attack, perhaps on the scale of the Paris attacks that killed 130 and injured more than 350 last month. Still, they ended up killing 14 and injuring 21 innocent Americans. Newsmax
*San Bernardino radical Islam killers operated under DHS and FBI radar. San Bernardino shooting suspect Tashfeen Malik passed a DHS counterterrorism screening as part of her vetting for a K-1 fiancee visa last year, but barring any criminal or terrorist background there was little chance DHS would have been able to detect whether she had become radicalized. Syed Farook, the other radical Muslim killer, got engaged to the female Pakistani Malik during an overseas trip in 2014. When Farook returned to the U.S. in July 2014, he brought Malik on a so-called fiancée visa. They subsequently married and she was granted a conditional green card last summer. To get the green card, they had to prove their marriage was legitimate, so Ms. Malik provided her fingerprints and pass criminal and national security background checks using FBI and Department of Homeland Security databases. PJ Media

*Counter-Terrorism expert Fred Burton smells full-blown Islamic jihad in San Bernardino massacre. The career counter-terrorism officer also gave his analysis on what counter-terrorism agents are going through. Burton said the first step is to start with the attackers and their motives. He believes the attack could be some sort of hybrid-model of workplace violence where an individual lashes out at his employer, but still feels the need or the desire to carry out some form of Jihad. KVUE- ABC TV

Don't miss out! Subscribe below to the free "Spy Agency Happenings!" newsletter and keep up-to-date on timely events occurring in the U.S. and foreign intelligence agencies!