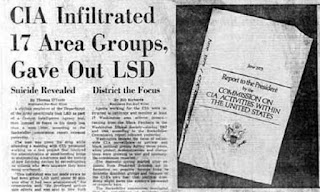 The Central Intelligence Agency released documents about their investigations into UFOs, aliens visiting earth and the possibility of alien life existing. It's as if the "X-Files" TV series were true! In this Issue 2/28/16 "Spy Agency Happenings!", I also include articles on the existence of Area 51 and the mysterious happenings that went on there.
Across the pond, British intelligence recently released a batch of UFO files to their National Archives, including over 5,000 pages of letters written in 1999. They reveal that the  grandson of a Royal Air Force (RAF) member who served as one of Winston Churchill's bodyguards during World War II, witnessed the prime minister purposefully avert "mass panic" by ordering a 50-year classification of an encounter between an RAF aircraft and a mysterious flying object. Well, the truth is now out...it's all been declassified.
Many heretofore unheard of spy agency operations are, indeed, reality and would make fantastic spy movies. Operation Gold would be one of them!  It was an elaborate plan to hack phone lines. Not unusual for the CIA, but the way it was done was bizarre- a 1953 joint operation between the CIA and MI6 to hack into the Soviet HQ in Berlin. At this time there was still a large wall dividing the city in two so they did the only sensible thing and built a giant 450 meter long tunnel to East Berlin! Get busy, Hollywood!
During the intense Cold War era, Operation Northwoods was planned. It is also revealed in this Issue 2/28/16 of "Spy Agency Happenings!". This op called for the U.S. Government to commit criminal acts in the US against American citizens. The CIA would orchestrate acts of terrorism, bombings, riots and hijackings. Why? To blame Cuba for the devastation so the U.S. could carpet bomb the island country. Yes, "false flag" attacks were planned as justification for all out war against Cuba. In the end, the plans were rejected by President  Kennedy in 1962. I wonder if such a "false flag" operation could occur today, to justify an attack on Iran or North Korea?
This issue also contains five videos of bizarre spy agency happenings. Conspiracy or actual happenings? Who knows. One is an interview with a dying CIA agent who talks about the U.S. government making actual contact with an alien! Conspiracy stuff? Very likely, I think, but you decide. At best, this newsletter is entertaining! There are more videos that expose five of the most bizarre CIA operations as well as ten of the scariest and weirdest of the agency's undertakings.
This Issue 2/28/16 "Spy Agency Happenings!" issue is for entertainment only. I'm not an advocate of conspiracy theories, so I published it for entertainment only. However, some of the happenings described did, indeed, actually happen. Which ones? You decide...enjoy!