KARL ROVE AND DICK CHENEY MADE ALL AMERICANS "FAIR GAME"

I sit patiently staring at him while slugging down a bottle of Pepto Bismol and thinking about the dangers she faced traveling to unfriendly countries undercover in order to shield Americans from weapons of mass destruction.

Unlike Hollywood depictions, most overseas agents use State Department official cover -OC- and play the James Bond role, commonly seen wearing tuxedos at gambling tables and mingling with foreigners in embassy cocktail and dinner parties.
NOC's do not enjoy the protection of diplomatic immunity. If caught by foreign intelligence, they have no protection from prosecution under that country's laws. Before Karl Rove and Dick Cheney outed her, Valerie Plame didn't pretend to be a "fake" diplomat. She  assumed deep cover and distanced herself from the luxurious State Department life that is complete with rich foods and top-flight martinis.
Using her cover, a vast mosaic of lies and props, she penetrated foreign organizations to detect and prevent proliferation of nuclear weapons and fissile material that could be used to make dirty bombs and be detonated inside America. Neither personal friends, family members nor her fiance knew she worked for the CIA's enigmatic Non-Proliferation Center in Langley, Va., a cadre of analysts, technical experts and former field operatives.
In case a suspicious foreign intelligence service conducted a background check, she masqueraded as an "analyst" for a fake legal services company called Brewster~Jennings and Associates. This CIA front company was listed on her Federal Election Commission forms when she made political contributions.

To add credibility to the deception, the business was registered on the Dun and Bradstreet database and her 1999 W-2 tax forms listed B~J and Associates as her employer. The workplace appeared above board, housed in a plush, 21-story office building in downtown Boston, complete with trendy restaurants.
The setting allowed her to blend in with everyday life or, if the need arose, to exit quickly into the swarms of commuters who passed by as they exited the Downtown Crossing subway station. Business cards, a phone number and post office box number complemented the subterfuge. 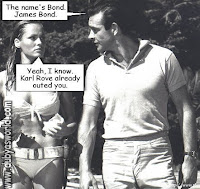 Gambling on her NOC deep cover for protection, Plame ventured overseas, aiming to infiltrate groups involved in smuggling nuclear weapons and the material used to create them. She attended trade shows and business conferences abroad where she interviewed and attempted to recruit foreign scientists and developed informal networks with engineers, secretaries, salespersons and suppliers. Plame used her NOC cover to "by coincidence" bump into honest and sleazy characters alike, whom her CIA handlers targeted. She hoodwinked, sweet-talked, bribed and recruited "assets" (spys) in order to gain information about raw materials and hardware even remotely associated with the process of building weapons-grade nuclear material that could someday wreak devastation on America's shores.A while ago, I talked with Harry Mason, who retired from the CIA in 1997. he is an expert in foreign and domestic intelligence, earning both the prestigious CIA Intelligence medal of Merit and National Intelligence Medal Of Achievement awards. Mason believes that, although the leak of Plame's name may not rise to a technical violation of the 1982 Intelligence Identities Act, CIA operatives must know they will be protected from traitors or political leakers...even if a key presidential aide has to resign. It's mind-boggling that the leak to columnist Robert Novak came from senior White House officials who signed form SF-312, an affirmative obligation not to reveal classified information. Thousands of hours of undercover work and Plame's network of connections were shattered. Mason also hinted that foreign intelligence services would pour through passport databases to determine if Plame ever set foot on their soil. They, indeed, did just that and found out when she entered and located those she had contact with. Because of the Karl Rove leak, the lives of many foreign citizens were placed in jeopardy. I get upset when viewing Karl Rove, the man who Washington leader who donned pin-striped suits and wrapped himself around the flag...while exposing CIA covert operations. Mason believes stronger criminal prosecution laws are needed for the news media and for columnists like the late Robert Novak, who disclose covert identities that harm America's national security and put the lives of intelligence agents at risk. I agree wholeheartedly and remember praying that all CIA NOC's who assumed Plame's Brewster~Jennings Associates cover and who had no diplomatic immunity...retreated back home quickly, alive and well.
Further Reading: Our Pick