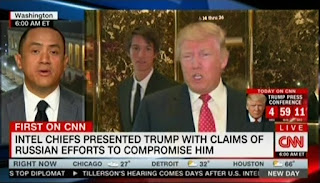 The Kremlin has had plenty of practice in the art of blackmail, extortions and bribery. Its use of compromising material, or kompromat, as a weapon against political opponents, journalists, businessmen, and even tourists with something to offer is somewhat fearsome, in the eyes of American counterintelligence professionals.


From Jeff Bezos’s allegations of extortion and blackmail by the National Enquirer, a publication with links to President Donald Trump, to Trump’s relations with the Kremlin, the Russian word Kompromat has become a household word in the U.S. Intelligence Community.


Those who oppose Putin or speak unkindly of Kremlin officials must constantly look over their shoulders and be aware of their surroundings and people they meet, for hidden-camera footage of them in bed with lovers to secretly recorded conversations may occur.


In January 1999, Prosecutor General Yury Skuratov was summoned to the Kremlin by then-President Boris Yeltsin’s chief of staff, who showed him a videotape of “a man who looked like” Skuratov frolicking in bed with two prostitutes. Then he asked Skuratov to resign, even though the prosecutor was in the middle of investigating Yeltsin’s administration for taking bribes from a Swiss firm trying to secure lucrative contracts for Kremlin renovations. It was a grainy tape and Skuratov would later say it was fake, but he submitted his resignation, nonetheless.
I've always wondered how Trump was compromised by Russian intelligence. An article by counterintelligence expert Malcolm Nance pretty much sums it up. Click HERE to read it.

Posted by Corey Pearson- CIA Spymaster at 8:20 AM