US Miliatry wants to know- Did Al Qaeda terrorists attack US Navy Air Station in Pensacola? 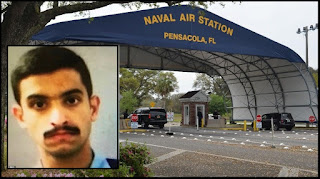 AQAP, al Qaeda in the Arabian Peninsula, claimed credit for the December 6, 2019 terrorist attack on Naval Air Station Pensacola which killed three U.S. sailors and severely injured eight other Americans.
According to the New York Times, AQAP claimed it directed a Saudi military officer to carry out the shooting (In an audio recording), where the leader of the Yemen-based group, Qassim al-Rimi, claimed responsibility for the Dec. 6 attack at Naval Air Station Pensacola, according to SITE, an organization that tracks jihadist media.
The group produced a copy of his will as well as correspondence that indicated he had been in contact with Al Qaeda. Experts said those elements gave the claim a plausible air.
The development shines new light from a separate report that indicated the Central Intelligence Agency (CIA) reportedly killed al-Rimi in a drone strike in Yemen. Is al-Rimi still living? Click HERE to read more.