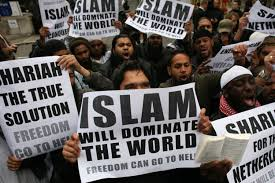 American jihadist Anwar al-Awlaki raised his ugly head again...from the grave. He is linked to the Paris Charlie Hebdo massacre and intelligence agents are fervently working to see if his network still thrives and is operational, even though he is no longer amongst us! Even though a U.S. drone Hellfire missile killed him in September of 2011 in Yemen, his influence lives on, for his past jihadist words continue to provoke radicalized Muslims to savagely attack Western targets (The recent murders of journalists, cops, and Jews in Paris is an example).
French, European and American intelligence operatives are aggressive gathering details about the planning, funding, and coordination of the Paris attacks so they can identify  sleeper cells that remain lurking in the shadows. So far, it is obvious that the New Mexico-born Anwar al-Awlaki has, indeed, inspired, directed, and provided the initial funding for the murderous Jan. 7 attack on the satirical tabloid weekly Charlie Hebdo.
The current leader of al-Awlaki's murderous terrorist group in Yemen is named Nasr al-Ansi and he proudly claimed responsibility for the Paris attack in the name of al Qaeda in the Arabian Peninsula (AQAP). His announcement came in video format and was broadcast on jihadist websites which called the attackers, Chérif and Saïd Kouachi, “heroes of Islam.”

Are radicalized Muslim American citizens a national security threat? (Comments welcome)
Before being blown to bits by a U.S. Hellfire missile, Anwar al-Awlaki played a significant role in the global al-Qaeda jihad. Unfortunately, his influence remains sizeable and long-drawn-out as he continues to be a legendary "who's who" for a new generation of jihad attackers against the

West. The online social media sites he created aired DVDs and taped sermons on jihad, many of which were found in the computers of jihadists such as the U.S. army officer responsible for the Fort Hood shootings, Major Nidal Hassan; the underpants bomber Abdulmuttallab; the Times Square bomber Faisal Shahzad; the planners of the 2010 cargo plane bomb plot; the Boston Marathon bombing Tsarnaev brothers; and with at least 52 other American citizens or U.S. residents who have committed jihadist terrorist-related crimes. They all had studied al-Awlaki's DVD and lecture tapes or communicated with him on the internet.


U.S. intelligence was particularly concerned about al-Awlaki because he spoke colloquial English, which made him remarkably valuable to al-Qaeda for recruiting American jihadist. Even today, his DVDs and taped sermons continue to emanate from Yemen and are used to perpetuate hatred against the West, particularly the U.S. Virtually every attempted terrorist attack against the West by Salafist jihadists since 2009 has had some association with AQAP or with this deceased Islamic cleric.
I think the numbers of radicalized Americans and  homegrown terrorist cells will multiply throughout America's heartland as long as we lack a robust counterintelligence capability. I felt this way ever since meeting Charles "Charlie" Allen, the well-known counterterrorism expert who spoke at an Association Of Former Intelligence Officers (AFIO) seminar in Tyson Corner, Va. in 2006. Allen warned us in a 45-minute lecture on how Americans become radicalized on the Internet.
Anwar Al-Awlaki, José Padilla, Adam Yahiye Gadahn, Bryant Neal Vinas, Ali Mohamed, Ziyad Khaleel, the Buffalo Six, and Wadih El-Hage were the initial radicalized American actors in Allen's warning- the cast has since multiplied.
In October 2008, Allen stated that Anwar al-Awlaki "targets US Muslims with radical online lectures encouraging terrorist attacks from his new home in Yemen." Quoting Allen, Al-Awlaki snapped back in December 2008: "I would challenge him to come up with just one such lecture where I encourage 'terrorist attacks.'"


Enjoy the Caribbean Islands? Like spy thrillers? Get the first 3 complementary episodes of "Corey Pearson- CIA Spymaster in the Caribbean"- sent immediately.

Al-Awlaki's retort was mendacious, indeed, for his call for violent jihad against Westerners turned up in the personal computer hard disc drives of many radical Islamists who have been arrested or killed. Just recently, Cherif Kouachi, one of the two brothers who carried out the Charlie Hebdo massacre, told a French television journalist in a phone call before he died that he was acting on behalf of al-Qaida of Yemen. "I was sent- me, Cherif Kouachi- by al-Qaida of Yemen," then he added, "I went out there and it was Sheikh Anwar al-Awlaki who financed me."
It's apparent that Anwar al-Awlaki's anti-Westerner murderous ideology still breathes in the mindsets of countless radical Islamists. So, what should the citizens and governments of Europe and North America do right now?
Here are 5 practical and logical steps to set off the opening salvo in the West's new war against radical Islam:


1.   Continue with the "capture or kill" stratagem against the leaders of radical Islam via special ops, drones, etc.


2.    Aggressively identify and control Muslim religious leaders who preach or call for the support of radical Islam. For example, the Islamic Center of Portland, OR was run by a Muslim preacher named Abdirahman Karive, who came to the U.S. in 1982 from Somalia. He founded the Global Relief Foundation in 1992, which was a charity that was eventually shut down by the U.S. government for financing Al-Qaeda. Keep watch over Islamic organizations in America that directly support or sympathize with terrorism and/or radical Islam.


3.   Fight back on social media! There are 56 million Facebook users in the Middle East. There are also thousands of web pages on social media that are used by radical Islamist groups to draw in and recruit followers. They use social and religious programs to subvert roughly 47 percent of the Arab world which is poor and ignorant. Oppose and expose them! Write in comments on these sites that detail the flaws in radical Islam's logic and how the leaders monopolize wealth and crave nothing but power. They use social media to disseminate ideas among the masses and paid more than 20 million Egyptian pounds to create an ‘electronic militia’ in order to broadcast rumors, skew the truth, and promote lies o undermine their opponents. The Western governments and citizens should form their own "online militia" and fight back.


4.   Increased monitoring of travel between Europe and the Middle East.  It seems as if European citizens come and go to and from Syria and Iraq by the plane load. Maybe a slight exaggeration, but newly radicalized European Muslims flocking to fight with jihadi militias in Syria more than doubled in 2013 and the numbers are swelling. Experts estimate that between 2,000 and 3,000 Europeans are acquiring combat and explosives skills as part of their anti-Assad fighting, as we speak. They will become a formidable terror threat upon their return home...to not only Europe, but to America as well.


5.   We need a formal declaration of war against radical Islam by the Congress of the United States. The declaration should resemble the one made by French Prime Minister Manuel Valls, who told his people on Jan. 10 that they were at war: “It is a war against terrorism, against jihadism, against radical Islam, against everything that is aimed at breaking fraternity, freedom, solidarity.”