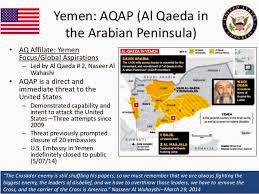 ﻿﻿﻿﻿﻿
In 2012, I believed there was a good chance that al-Qaeda may topple the Yemen Government. At the time I was surfing foreign media and came across a Xinhua news report of a huge bomb blast that hit the headquarters of the Yemen military intelligence agency in the Al-Mansoura district in Aden. Xinhua news interviewed a local police officer in this southern port city, who said there were no immediate reports of casualties.
Luv the Caribbean? Enjoy spy thrillers? Journey the Caribbean Islands with CIA Spymaster Corey Pearson spy series. First 3 episodes sent immediately!

The bomb was planted by gunmen of al-Qaeda in the Arabian Peninsula (AQAP) and detonated at the main gate of the military intelligence building, shattering the windows of residential buildings nearby. The battle between AQAP in Yemen was heating up in 2012 and it has intensified ever since.
Currently, in January of 2015, the Syrian-based terror group ISIS has moved into Yemen to recruit a fresh supply of jihad warriors. It is competing with al-Qaeda for control of the country in at least three provinces in southern and central Yemen.

The good news is that both terrorist groups haven't banded together and the intense competition between them has resulted in gun-battles. Even though fierce battles are being waged in Yemen's eastern provinces, AQAP remains the dominant force there.
According to CNN, one American intelligence official believes that, although there may be a smattering of ISIS loyalists among Sunni extremists in Yemen, they are likely "mid-level AQAP militants who are sympathetic to ISIL's vision but haven't broken ranks."
The ISIS factor wasn't considered in 2012, when I was applying basic GEOINT overlaying mapping skills to predict the likelihood of al-Qaeda taking over the Yemeni Government. The death tolls were rising rapidly and a fresh battle began between al-Qaeda militants and government forces in the neighboring southern province of Abyan. Eighty army soldiers and 27 terrorists died in that heated exchange.
Now, in 2015, I think back on my 2012 OSINT research and the conclusion that the Yemen government was on the brink of toppling due to Al Qaeda's presence. AQAP took full advantage of the country's political and economic hardships- a civil war was waging in the North, a secessionist movement in the South, and they had no problems recruiting the masses of disenfranchised citizens of Yemen. I wonder how many jihad warriors ISIS is recruiting in Yemen, as we speak?
Economic failings combined with a government full of corruption also bolstered al-Qaeda's effectiveness in 2012 and these factors are, no doubt, still in play not only for AQAP...but ISIS as well.

Another mitigating factor present in 2012 that led me to believe Yemen would become a failed state under AQAP's control was that Yemen needed internal security... but it was absent. They simply could not prevent the resurgence of al-Qaeda in the Arabian Peninsula, for the southern secessionist movement and the civil war in Saada spread the meager government security forces too thin.
In 2012, I uncovered the article "AQAP Vows To Control Red Sea Gate (al-Qaeda in the Arabian Peninsula )" in the APS Diplomat News Service. The South Yemen-based AQAP leader Sa'id al-Shehri vowed to control Bab al-Mandab, the southern gate to the Red Sea. He also claimed credit for the failed attack on the passenger jet approaching Detroit and called for further attacks against US and Jewish interests.
Shehri preached that the Gulf Cooperation Council (GCC) countries and the U.S. "crusader" interests were everywhere and stressed, "The Christians, the Jews, and the treacherous apostate rulers have pounced on you. You have no other way out from this plight than to wage jihad."
If Saudi Arabia and the West begin a full anti-insurgency campaign against AQAP, I wonder if they'll make amends with and band together with ISIS?
Related Posts:
Robert Morton, Ed., Ed.S. is a member of the Association Of Former Intelligence Officers (AFIO) and writes the online spy novel series "Corey Pearson- CIA Spymaster in the Caribbean".  The views expressed on this site do not represent those of any organization he is a member of. Contact him on the Secure Contact Form
Posted by Corey Pearson- CIA Spymaster at 8:18 AM