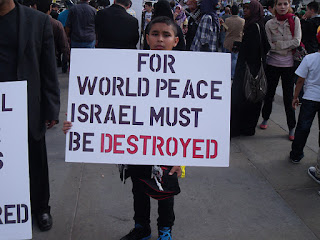 Mark Dubowitz is Director of the Foundation for Defense of Democracies in Washington, DC. I heard him talk on C-SPAN's Washington Journal on 3/11/16 regarding Iran's firing of two long-range ballistic missiles with the phrase “Israel must be wiped out” written in Hebrew on each one. As I listened to his dialogue with the audience call-ins, eight thoughts of Iran developing a nuclear weapon with ICBM-delivery capabilities surfaced in my mind:


First, the timing of the launch was perfect: as Vice President Biden visited Israel. U.S officials gave a quick, bland response to the hard-liners in Iran by saying the missile launches did not violate the nuclear deal reached in January.


Iran’s message was clear and I thought about the awkward discussion the missile launch must have generated between Biden and Prime Minister Benjamin Netanyahu. Certainly, Biden couldn’t urge him to end the aggressive actions taken by the Israeli Defense Forces (IDF) and the Mossad intelligence agency against Hamas and the Palestinians. Too bad, for each new Israeli settlement built in heretofore Palestinian lands indirectly energizes the hard-liners in Iran to continue their revolutionary ambitions against the pro-Israeli U.S.


The missile launch precluded Biden from urging Netanyahu to re-open peace talks with the Palestinians, since the Hebrew words written on the two Iranian missiles were reminders to him that every country touching Israel's border desires to wipe out every man, woman, and child within.


Second, I thought about what will happen as the ten-year inspections of and restrictions on Iran’s nuclear power development ease. I wrote an article listing six resources that studied Iran's pursuit of nuclear weapons and wonder if they will double-cross us and resume underground nuclear weapons development. What will the U.S. and Israel do if Iran breaks the nuclear deal? Would America once again warn Israel to "hold back" from bombing Iran while beginning a replication of nuclear talks with Iran?


﻿     I doubt Israeli would cooperate with us a second time. Instead, they would justifiably launch a massive military strike with bunker-busting bombs or tactical nuclear weapons against all Iranian nuclear sites. This could lead to all-out war in the region, but Israel's perception would be that they have nothing to lose. The image of the words Israel Must Be Wiped Out! written in Hebrew on Iranian missiles armed with nuclear weapons is embedded in the minds of every Israeli.


In the midst of this uncertainty, it is reasonable to conclude that Israel has expanded its intelligence network in Iran to keep tabs on nuclear deal compliance. I doubt if they would rely solely on the findings of the IAEA inspectors on the ground in Iran. A covert campaign of assassinations of Iran's nuclear scientists, digital attacks against its computer systems, even selective small-scale aerial bombings of Iran's nuclear facilities could very well occur if the IAEA inspectors are thwarted in doing their job.


A third concern entered my mind, one that bothers me greatly: An Iranian nuclear strike against Israel is in the cards if Iran's citizenry someday revolts in an "Iranian Spring." The elite Ayatollahs, fortified in their bunkers in the holy city of Qom, once they realize all is lost, may very well launch their nuclear warheads at Israel. Nuclear capabilities will make an "Iranian Spring" vastly different from the "Arab Springs."


﻿     A fourth thought: Americans forget how much the Iranian government despises the U.S. Even though a nuclear deal has been agreed upon, Iran loathes our foreign policy in the Middle East. They have not forgotten the events and aftermath of the 1979 hostage crisis...their revolution lives on! The Supreme Leader Ayatollah Ali Khamenei now runs Iran and has final say-so on all matters and he, indeed, has not forgotten the U.S. support for the Pahlavi dynasty and the Shah's despotic terrorization over the Iranian citizenry.


Khamenei directs actions against the U.S. and the West through the Iranian Revolutionary Guard and his terrorist proxy, Hezbollah. It was he who OK'd taking 10 U.S. sailors hostage in the Persian Gulf when their small craft accidentally veered off course. It was he who engineered past confrontations with the U.S., such as threatening to cut-off the world's oil supply in the Strait of Hormuz whenever they disagreed with us on a variety of issues which could be handled diplomatically.


With an arsenal of nuclear weapons, such disagreements grow highly dangerous, for chances are good that a spark could ignite another major war in the region, a war beyond our wildest dreams that might involve China and Russia as well.


﻿     My fifth concern is about the U.S. underestimation of the strength possessed by Hezbollah, Iran's terrorist proxy. It is the world's largest, most sophisticated, and wealthiest and most military-capable terror organization around. With sanctions being lifted, billions will be spent by Iran to create, train, fund and deploy more Hezbollah cells in Europe, Africa, Asia, and in the Tri-Border area of South America. In fact, the U.S. State Department totally underestimates Iran's presence in Latin America.


Hezbollah has murdered more Americans than anyone other than al-Qaeda. Forget about Camp David talks with the Iranian leaders anytime soon, for since the 1979 Islamic Revolution Iran continues to use a unique ideology to achieve hardheaded national interest objectives based on extremist ideological goals. This uncompromising diplomatic approach will continue and has been demonstrated by their response to past economic sanctions placed upon them: They grew more unified.


Yes, I have a sixth trepidation! Iran’s animosity towards Israel places the U.S. between a rock and a hard place: between Israel's justified paranoia and Iran's bellicose verbiage and terrorist deeds. I do not blame Israel for its past aggressive attempts to prevent Iran from obtaining nuclear capabilities. Iran has murdered Israeli citizens throughout the world, for years. Do we not remember the AMIA bombing attack on the Asociación Mutual Israelita Argentina building in Buenos Aires on July 18, 1994, that killed 85 people and injured hundreds? It was Argentina's deadliest bombing in history...in a Jewish community of 200,000, the largest in Latin America.


This bombing case went to court and was marked by incompetence and accusations of cover-ups. Despite overwhelming evidence against them, all suspects were found to be not guilty in September 2004. In August 2005, federal judge Juan José Galeano was impeached and removed from his post on charges of "serious" irregularities and of mishandling of the investigation. It doesn't appear Jews are safe anywhere.


Then, on October 25, 2006, Argentine prosecutors Alberto Nisman and Marcelo Martínez Burgos formally accused the government of Iran for directing the bombing and its terrorist proxy, Hezbollah, for planning and executing the bombing attack. The prosecution claimed in 2006 that Argentina had been targeted by Iran after the Buenos Aires' decision to suspend a nuclear technology transfer contract to Tehran. This "payback" response to not getting what they want is another example of Iran's hardheaded diplomacy.


Here’s a seventh thought that makes me uneasy: Iran's nuclear power plants. They will produce plenty of highly-enriched uranium (HEU). Is Iran capable of allowing their terrorist proxy to accidentally "steal" the spent nuclear fuel rods to be used by Hezbollahto create a "super" dirty, radioactive bomb to explode inside Israel...or downtown Manhattan...or in Washington, DC.? I think so.


﻿     Lastly, a concluding eight thought: I don’t blame Prime Minister Benjamin Netanyahu for chastising the U.S. and addressing our joint session of Congress last year, for he doesn’t trust Iran to abide by the rules listed in the nuclear deal. The only reason Iran agreed to the deal was due to the economic chaos it experienced.


Go back to the December 2010 and January 2011 talks with the six powers. All tried to negotiate with Iran, but zero progress was made. Only when the significant 2012 multilateral sanctions were imposed on Iran's oil exports, including an oil purchase embargo by the European Union, did they decide to enter new nuclear talks without preconditions (After they tried to block commerce in the Strait of Hormuz). Of course, at the same time, Iran began uranium enrichment at a deep underground facility near Qom.
Further Reading- Our Pick:


Robert Morton, M.Ed., Ed.S. is a member of the Association Of Former Intelligence Officers (AFIO) and writes the online Spy series, "Corey Pearson, CIA Spymaster in the Caribbean". The views expressed on this site do not represent those of any organization he is a member of. Reach us on the Secure Contact Form.
Posted by Corey Pearson- CIA Spymaster at 8:31 AM