Is Trump a chump for Russia's SVR spy agency? 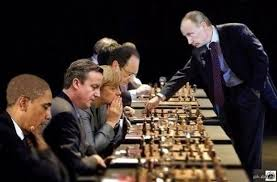 
So, what are these three systems all about? The first is called “Dispute.” It constantly monitors the blogosphere and social networks and unearths and targets critical propaganda attack points in order to single out the centers where the information originates. It learns the ways by which the information is spread through social networks and blogospheres and looks at factors that affect the popularity of various reports among Internet users- “What makes some info go viral?” they ask.
“Monitor-3” is the second system ordered by Military Unit 54939. It serves as a digital command post by organizing and managing a huge virtual community of controlled disinformation agents who inject state propaganda into the hubs identified by “Dispute.” The two systems work together, forming online virtual communities of popular subject matter. The SVR ends up controlling the flow of this information through the social media and across blogs.
The third, and probably most important system is “Storm-12.” It automatically spreads the necessary information through the blogosphere, as well as “information support of operations with pre-prepared scenarios of influence on mass audience in social networks.”
The first two systems started at the end of 2012 and “Monitor-3” began in 2013. The SVR refused comment on this matter, saying it has no obligations whatsoever to answer questions posed by unknown foreign reporters who call their offices about secret projects that may or may not be used by them.
Is the SVR’s deluge of daily, mixed messages, half-truths, misleading statements, and out-and-out fabrications masquerading as facts appearing on your personal computer screen? Are you a fall guy, a chump, for the SVR? Worse yet, have millions of American voters became Putin’s saps during the 2016 presidential election campaigns?
The CIA and NSA confirmed that Putin’s government had repeatedly hacked into and leaked Democratic Party documents throughout the presidential campaign. Instead of listening and learning from this intelligence, President-Elect Trump ignored and contradicted it, then insulted the CIA and NSA.
The SVR has not only aided Trump’s campaign and interfered with America’s election process, it created a rift between the future POTUS and the entire U.S. Intelligence Community (IC) itself!
The forefather of the SVR, the KGB, turned disinformation usage into an art form and expertly honed deception strategies throughout the Cold War. It’s now resurrected its ugly, digital head on your blogosphere and social media platforms.  Beware.

Related post: Putin ramps up espionage activities against the U.S. and NATO

Robert Morton, M.Ed., Ed.S. is a member of the Association Of Former Intelligence Officers (AFIO) and writes the online spy novel series "Corey Pearson- CIA Spymaster in the Caribbean".  The views expressed on this site do not represent those of any organization he is a member of. Contact him on the Secure Contact Form
Posted by Corey Pearson- CIA Spymaster at 8:22 AM